Drama students who are participating in the National Theatre's 'New Views' script writing programme were lucky to be provided with tickets to see a new production of 'Small Island' in London recently.

Below is a review from Catherine Jepps (11Y) who attended the trip.

On Wednesday 9th March, we had the opportunity to see ‘Small Island’ at the National Theatre. ‘Small Island’ is a play based in a post WWII setting and depicts the struggles of racial prejudice and the stubbornness of society to change.

The play focuses around the stories of Queenie, Hortense, and Gilbert, with Hortense wanting to escape her life on her small island in the Caribbean, Gilbert wishing to become a lawyer, and Queenie wishing to aid people who find difficulty due to the war.

The play tackles issues within society at the time, and explored the challenges of victims of discrimination, especially Hortense and Gilbert who struggle with trying to make a living for themselves.

Through the use of set, sound, lighting and performance, the struggles are brought to life and create an emotional connection between the characters and audience. It exposes the ignorance within society, despite the unity that was promoted during the war.

Watching the performance made us reflect in our past, and our behaviour towards others, but to feel even more disappointed that even today, racial prejudice continues.

Despite the tragedies, the play also focuses on hope and belief.  I would highly recommend this performance, especially if you are interested in the development in attitudes in society over time."

This trip was part of the National Theatre 'New Views’ scheme where students are given the opportunity to write a play with input and workshops with a professional playwright. Seeing this live theatre piece can be used by our Drama students as part of their examination on Live Theatre.

Travelling to London via train and tube and the atmosphere at the National Theatre was a unique experience for the students - one that will stay with them for a very long time. 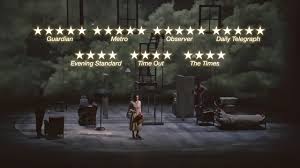